I think that banana bread is one of the best creations ever. It is easy to make, delicious and if you manage to choose the right ingredients- it can be healthy as well. There are many recipes for banana breads out there and it’s just a matter of taste to choose the one that you’d LOVE.

Personally, I like my banana bread without any flour or sugar. The bananas and oats added to the mixture give enough sweetness and texture. This one is with a little bit of honey, because although I don’t look for sweetness, my family does.

I am writing this article with the intention to put some interesting history and facts around the banana bread as well as the recipe, which you will find on the bottom of the article, if you are not a fan of history. Frankly, I really enjoyed researching this topic because by now, I was just a consumer and I didn’t think at all about any facts behind this mouth-filling treat.

There are 3 things that led to the creation of the banana bread- bread, quick breads and bananas.

The first bread creations come from 12, 000 years ago in the Neolithic times. Probably, this bread was made quite primitively- crushing grains with stone, adding some water and then cooking it under hot ashes.

Then the Egyptians found out the existence of wheat dough ferments, or the so called sourdough. This happened approximately around 4,000 B.C. They discovered that when they leave the bread to ferment, it produces gases which make a lighter and more pleasant tasting loaf of bread.

The origin of bananas

On the other hand, the banana originally comes from South Asia and then travels through India, the Philippines, New Guinea. This journey happened probably around 2,000 B.C., but in that time- people in those geographically areas were consuming mostly rice, and wheat was not very common. Thus, bread making was not popular.

Then, a Greek philosopher wrote the first scientific book on botany (4th century), where he describes the banana plant. Another naturalist and philosopher- Gaius Plinius Secundus (or Pliny the Elder) wrote about the banana and during the time he was alive, it is known that the Greeks made bread using ingredients such as spices, fruits and honey. So, some people believe that maybe the Greeks were the ones that came up with a recipe of a banana bread, using the knowledge of the philosophers and the plants they had.

However, most of the recipes of a banana bread are considered “quick breads” because they require baking powder. And these were not invented until the 18th century in America where pearlash was first discovered.

Pearlash is actually a refined version of potash. It is a “leavener“- the substance that makes baked goods light and moist and the first time somebody came with the idea of adding potassium carbonate in the dough was of women (Amelia Simmons) around 1780s. This substances reacts with the acid in sour milk/citrus and a chemical reaction leads to carbon dioxide’s production as a by-product. This makes the “little holes” in the baked goods, but it was used for a short period of time due to the discovery of Saleratus (something like soda bicarbonate) after approximately 60 years (Lohman 2012).

But how did bananas get into America?

Ship captains really struggled with transporting fruits and vegetables that ripened or rotted so quickly, that’s why bananas were not introduced to the Americans until the 20th century with the development of refrigeration (Hamel 2017).

With the presence of bananas and baking powder, there was nothing missing to create such a delicious recipe. However, something had to make people cook a bread from a ripened banana. And this was the Great Depression, when the stock market experienced a crash and every food product was considered precious. Thus, people didn’t want to throw away food- even rotten bananas were seen as an opportunity to eat something.

FYI: There is a National Banana Bread Day, celebrated on 23 February.

Most banana bread recipes contain a lot of sugar and flour. I had to make this one sugarless, gluten-free and vegan, because a family member has to stick to a specific diet. That’s why I used Quaker Gluten-free Oats, ripened bananas, local honey, eggs, spices and I also wanted to make this a bit more protein-ish and I added Banana Whey Protein Powder by MyProtein.

This banana bread can be eaten as a dessert with some crushed walnuts on top or as a breakfast with Greek yogurt on the side. 😉

You will find the recipe below: 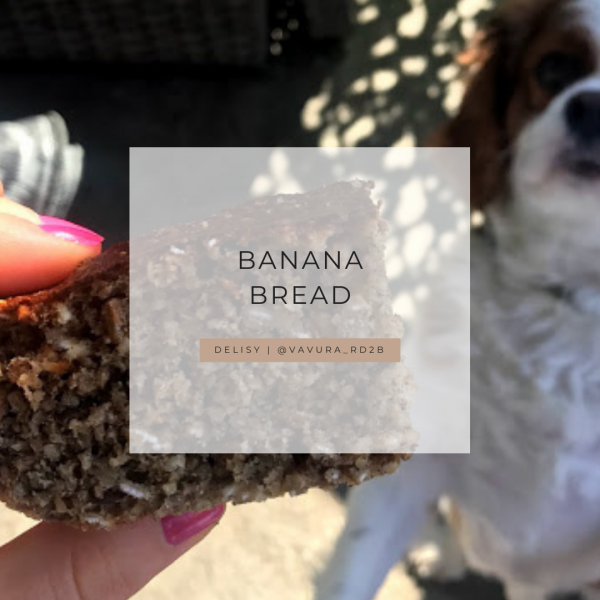 This website uses cookies to improve your experience while you navigate through the website. Out of these cookies, the cookies that are categorized as necessary are stored on your browser as they are as essential for the working of basic functionalities of the website. We also use third-party cookies that help us analyze and understand how you use this website. These cookies will be stored in your browser only with your consent. You also have the option to opt-out of these cookies. But opting out of some of these cookies may have an effect on your browsing experience.
Necessary Always Enabled
Necessary cookies are absolutely essential for the website to function properly. This category only includes cookies that ensures basic functionalities and security features of the website. These cookies do not store any personal information.
SAVE & ACCEPT
Social Share Buttons and Icons powered by Ultimatelysocial